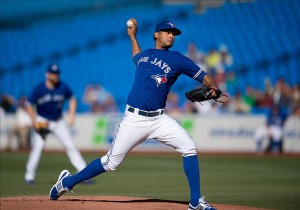 At the start of the week I’m not so sure that some would have agreed that the Blue Jays rotation is becoming clearer as to which pitchers will be in it.

The week started with Ricky Romero and Marcus Stroman blowing up and both being sent to minor league camp.

Wednesday was J.A Happ’s turn to try to impress and, well, uh, lets just say it wasn’t pretty 71 pitches and he couldn’t get out of the third inning, and out of those 71 pitches only 34 were for strikes. Happ’s spring ERA also shot up to 20.25. I know you shouldn’t take much out of spring training numbers but that’s just ugly and isn’t going to cut it.

Finally on Thursday Esmil Rogers took a step forward in taking the last available spot in the rotation by having a solid start allowing a run over 4.2 innings of work and striking out six. It was Rogers’ best outing this spring and with Rogers being out of options the chances of him making the rotation look much better now than they did earlier with most of the competition pitching themselves out of a rotation spot this spring.

The best pitching performance of the week came on Friday when Aaron Sanchez pitched shutout ball into the sixth inning and only allowing three hits to the Tampa Bay Rays opening day line-up. Sanchez has been cause for plenty of conversation this spring as Blue Jays play-by-play man Buck Martinez said earlier that Sanchez has had the best stuff in camp, and even The Fan 590’s Bob McCowan said earlier this week that Sanchez should be in the rotation if he is the best five starters in camp.

Not to throw a bucket of water on all of this Sanchez should make the team talk, but lets look at Sanchez’s resume first. Sanchez has never pitched above “A” ball, the most amount of innings he has thrown in a season are 90. And Blue Jays management are not exactly the type that have rushed prospects to the big leagues Letting him pitch this season in Double A New Hampshire wouldn’t exactly hurt. Let him work on improving his control and lets see how he does when he hits a struggle and let him learn the ups and downs of pitching in the minors. If he has a good season in New Hampshire maybe the Jays bring him up in September and let him get his feet wet.

It’s been known for a while that Sanchez and Stroman are the future, I believe that Stroman will be pitching for the Blue Jays at some point this season. And Sanchez could make it up in September. But lets not at the same time make the mistake of rushing these guys up if they’re not ready.

As for the rotation if things work out the way they have so far this spring I think a lot of fans have a clearer idea just who gets that final rotation spot.