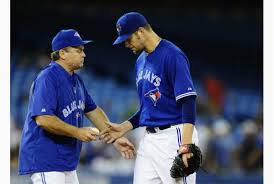 The Blue Jays announced Monday afternoon that they weren’t extending a Qualifying Offer to Josh Johnson. Either 14.1 million dollars that would have been in that offer was too much for Alex Anthopoulos to gamble with or maybe the Jays have decided that they are done with risky players with a history of injuries.

Johnson will now be free to sign anywhere. It was reported earlier Monday afternoon that the Jays had not been in negotiations with Johnson’s agent Matt Sosnick, which leads me to believe that they are turning the page from Johnson.

Sosnick meanwhile was reported telling Mike Berardino of the Pioneer Times that they would look for a team with a good pitching atmosphere, a good defence behind him and a chance to win.

So now it’s on to plan B, maybe plan A depending on who you want to believe. On the bright side Anthopoulos can use that 14 million towards upgrading the pitching staff. Although what route to take to improve the rotation is the biggest question. Like I’ve stated in earlier posts starting pitching on the free agent market probably costs you more than the 14 million that Josh Johnson’s qualifying offer would be, and now thanks to Tim Lincecum’s ridiculous contract he signed before the World Series even below average pitching could demand 10-13 million a year.

There are guys out there that the Jays could target. The Reds didn’t offer Bronson Arroyo a qualifying offer either although Casey Stern and Mike Stanton of MLB radio seem to think that Arroyo gets a 2 year deal in the 30 million range. Arroyo’s other issue that would hurt him in the A.L East is that he is the right handed equivalent of Mark Buehrle. Bartolo Colon is also available but has said he’s like to pitch another 3 years, for a guy who will be 41 next May, one wonders what is really left in that tank. Although Colon did win 18 games in 2013 and had the lowest ERA of his career at 2.65. Matt Garza is out there but with his past injury concerns I would imagine that the Jays pass on him even though he is the best of the free agent class available.

Of course there is the trade route, which is probably the most likely way to improve the team, however the assets that the Jays have at their disposal have dwindled since last off-season’s trades. If the Jays are to move to get pitching it will almost include a player off the big league roster and if they want a number 1 or 2 type starter then chances are that Anthopoulos would have to include either Edwin Encarnacion or Jose Bautista.

The Jays have been linked in rumours for the Cubs Jeff Samardzija who could be a fit but the Cubs asking price would probably be a steep one. Also according to mlbtraderumours.com the Jays are interested in Gordon Beckham from the White Sox, there is talk of expanding the deal to include pitchers Hector Sanchez and John Danks, small problem is the White Sox asking price of Marcus Stroman and Aaron Sanchez, if I’m the Jays I don’t part with either asset.

And if the trade market fizzles they can always fill from within. Drew Huchison is throwing very well in the Arizona Fall League and could be in a battle for that fifth spot in the rotation. Marcus Stroman could also be considered for the big team although could probably use another year in the minors with possibly a call-up in September. Also don’t forget Todd Redmond and Kyle Drabek could be in the mix as well.

Seriously though if the Jays plan on being contenders in 2014 I would think that they need at least 2 more starting pitchers, If Brandon Morrow’s health wasn’t such a concern going forward they could get by with one. Either way the clock is ticking on Alex Anthopoulos to get this ship righted and it starts with starting pitching.